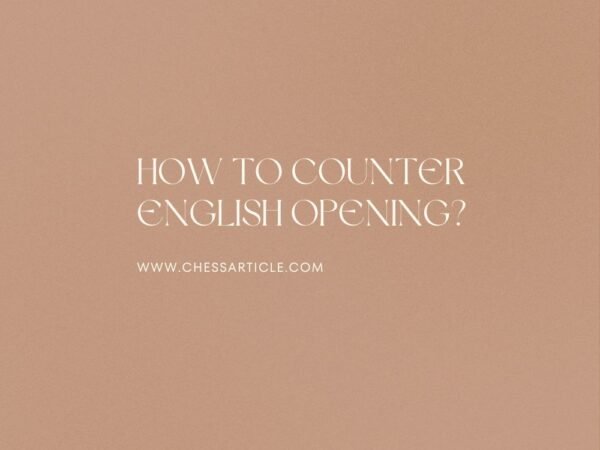 English opening starts with 1.c4. This is one of the openings which everyone ignores to prepare. In English Opening, white’s main plan is to start the attack from the queen’s side. This Opening is one of the safest chess openings I have ever seen.

There are multiple ways to counter the English Opening, which we will see in this article.

What is English Opening?

English Opening is one of the oldest chess openings, played thousands of times on the top level. Thee are mainly two plans for white. First is to open the white squared bishop from h1-a8 diagonal, do a short castle, and start the attack from the queen’s side. The second plan is to develop pieces in the center by playing e3, b3, Be2, etc.

Both the plans are decent and black need to be ready to handle any situation. English Opening is generally very safe to play for the white side. Usually, if a white makes any mistake, then also it is very difficult for a Black to convert the immediate advantage.

How to counter English Opening?

There are various chess openings that help you to counter English Openings. One of the most popular is King’s English Variation. In this variation, Black plays 1…e5 and takes complete control in the center. This is by far the best chess opening.

Apart from this, there are many other options which you can play against English Opening. The main thing while choosing the Opening is your liking. If you like the position arriving from a certain variation, you should play it without any doubt.

The main advice here is not to ignore the English Opening. I have seen many players, including myself, ignore English Opening and then start losing many important rounds.

In King’s English Variation, black plays 1st move e5 and try to gain center control. This is the best chess opening you can play against 1.c4. White also has various options against it. The most natural option is to play 2.Nc3. After that, black usually does short castle and plans to play d5 slowly.

This Opening is dangerous for both sides. If you prefer a safe opening, you should go with a symmetrical variation against English Opening.

To prepare for this opening, watch 1.c4 e5 – Complete Repertoire for Black by GM Davorin Kuljasevic. This course is available on Modern Chess, where you will get flat 45% off by using code Nikhil45

If you are already familiar with King’s Indian Defense, you should go with Anglo Indian Defense. It will be very easy to play this instead of preparing multiple chess variations.

The main plan of this variation is to do a short castle and then choose the correct plan according to white’s piece play. Black can choose between C5 or E5 break. All the plans in this variation are comfortable for Black and give immediate equality. White should also know some theory parts and should play aggressive chess to beat Black.

As the name suggests, Black plays 1…b6 against English Opening. This is not the popular Opening, but this variation gives practical benefits. Black’s main plan is to open the bishop and maintain a symmetrical structure. However, Black can change the structure and choose to play aggressively.

This Opening is perfect to surprise your opponents in rapid or blitz games. For classical, I don’t recommend this to play as your main weapon. You can play once or twice in classical.

This is one of the most famous chess openings to play against the English Opening. Black starts to play symmetrical and plays first move 1…c5. Black’s main plan is to play an exact replica of white’s moves.

The only drawback of this variation is black plays mostly for a draw. If white plays all accurately, black don’t get any chance to beat him. White always has one move advantage in a symmetrical structure. You can play this Opening against higher-rated opponents or in a situation where your opponent needs a must-win.

Is English Opening good for white?

English opening is perfect for white. If you like to play positional yet tactical chess, you should go with it. English opening theory is not so explored, and hence you can take some advantage of it. Another advantage of English Opening is there is very limited theory involved. If you are someone who wants to avoid the theory and play a practical game, you should go with English Opening.

You can follow the book series by GM Mihail Marin on English Opening. It is a complete book series that you can buy from Amazon.

You can also watch the following video by Gotham Chess, where he explained the entire opening in less than 10 min.

What is the best Opening against c4?

This is a tough question. Opening choices are completely based on the player to the player. Still, I would say 1…e5 is no doubt the best choice if you want to go for the win. If you already know King’s Indian or Grunfeld setup, you should go with 1…Nf6.

I would suggest preparing only one Opening against English Opening for beginner players and sticking to it. For advance level players, you always need to try new variations. The best way is to play different variations of online games or practice with computers.