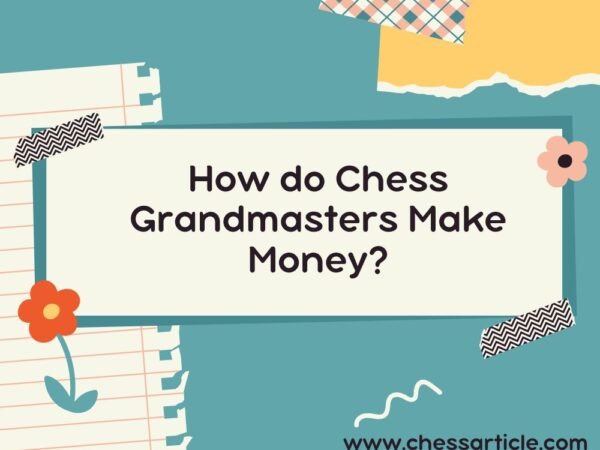 Sometimes you will need a lot of luck and patience to become Grandmaster.

If we compare monetary returns compared to time and money invested, it’s comparatively low. Thanks to online chess after covid 19, there is an increased need for chess coaches. Many GMs also understood that they would earn far more from coaching than playing.

How do chess grandmasters make money?

There are various ways in which Grandmasters make decent money. You will be shocked to know Grandmasters don’t make enough money from playing compared to other resources. Following are the few ways from GMs make money.

The top 20 Grandmasters earn good money by playing chess. On the elite level, the prize money ranges from $100k-500k split among 10-15 players. On top of that, they also get appearance money and all the traveling cost. Elite players usually play 5-7 classical tournaments in the year and 5-7 rapid and blitz chess tournaments in the year. Following are the few elite tournaments that happen every year.

Apart from these tournaments, some leagues happen in Europe. In the league, the team owner purchases good chess players for their team, and players get all conditions and some money to play each round. In Europe, every country organizes leagues.

Many other official events are organized by FIDE and various online chess tournaments with good prize funds.

It seems that there are a lot of tournaments in the world. In reality, players cannot get invitations for all tournaments, and also, due to increasing competition, they cannot win huge prize money.

Coaching is a great and easy way to earn money for Grandmasters. Grandmasters charge anywhere from $50-100 per hour. This amount varies depending on experience, student level, rating, and other factors. Many chess grandmasters stopped playing chess and doing full-time chess coaching.

Sometimes it gets difficult to get flow from students due to high charges. But it is the easiest and most convenient way to earn money as a chess grandmaster.

After covid 19, chess became too popular in the world. Because of this, many chess players started streaming on Twitch and on Youtube. A few GMs also started streaming chess content. Those who maintained consistency and regular streaming became popular.

There are various platforms where you can do streaming and earn a good amount of money. To stream chess, you need to add a funny element. No one will watch serious chess streaming. Here are a few people grandmasters who do regular streaming

Writing books is also an old way to earn a good amount of money. Usually, chess books cost way more than normal books. The main reason is the value and number of sales.

Many authors have become very popular because of their writing skills. Few Grandmasters wrote more than ten books in their career, and most of the books were very successful.

Usually, a chess book costs $30-40, and the author gets a royalty on each sale or a fixed amount. Writings books for beginners is also a great way to sell more copies. If you target advanced chess players, you can expect fewer sales. Following are a few grandmasters who are very popular authors.

Apart from this, GMs also started their chess blogs (Like this blog). On the blog, they share their knowledge and earn through various sources. This is not a very popular way to get money as you require a lot of knowledge to make a successful blog live through blogging.

GM Noel Studer is the best example of this. He started his blog called Next Level Chess. He is getting many views from it; you can see the screenshot showing how many pageviews he is getting.

This is the most popular and easy way to earn money as a grandmaster. Many GMs create chess courses on various topics and earn a lot. Chessable, Modern Chess, The Chess World, Remote Chess, Chess.com, ChessMood, and Ichess are some of the greatest examples of successful chess course websites.

Chessable is the most popular website in all of them. We have reviewed some websites you can read by clicking the following links.

It is not easy to get sponsorships for many chess players. Although Grandmasters get sponsorship often from the government, various organizations, etc. However, this amount is a one-time amount for only a few years. Once players decrease their rating, this amount also gets changed.

Anyone cannot depend on sponsorship income. It is just a nice way to get more support.

There are very few countries that do this. However, the Grandmaster’s salary is quite low in this type of job. The only benefit is that they get a permanent income source despite of there chess results. Also, they get various allowances and free travel for tournaments.

Can chess make you rich?

Simply no. Even the richest chess player hasn’t earned more than $100M. The total chess market cap is very small, and it is hard to make a huge amount of money. But the good thing is that the number of chess players has been increasing in the recent 10-12 years. You can see the following google trends graph for the last few years. Hopefully, chess will generate a few multi-millionaire in upcoming years.

Can a chess player make a living?

Chess players cannot make a very comfortable living by just playing. He or she has to do some other job or chess coaching. If you are above 2700 FIDE-rated players, you can make a decent amount of money.

How much do chess grandmasters make?

Chess Grandmasters roughly make around $1.5k-8k per year. Elite Grandmasters make 5-6x more amount than stated above. You can read this article to know exactly how much titled players make money.

NO! To become Grandmaster, you need to cross 2500 FIDE ratings and score 3 GM norms which are way too difficult. To achieve the WGM title, women must score 3 WGM norms and a 2300 rating. Becoming International Master is also very difficult than becoming WGM.

There are less than 2000 Grandmasters worldwide; only 39 (about 2%) are women players, and the remaining 98% are male players.