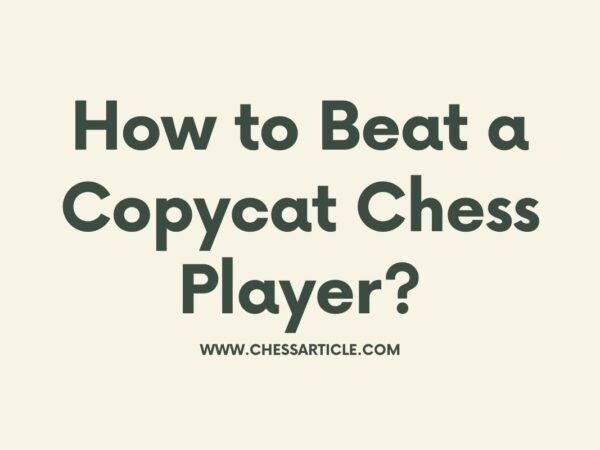 Chess players are usually very intelligent. Some chess players use other techniques to win against the opponent. Copycat is one of the techniques which we see in many games. In this blog, we are going to see 5 options from which you can learn how to beat a copycat chess player.

Copycat in chess simply means playing the same moves which your opponent played. Here is an example of a copycat position in Reti Opening. The copycat technique is mostly used by the Black player. White gets first move advantage and hence usually white players don’t go to play the same moves.

When you are playing as a black, sometimes in some openings, it is a force to play the same moves. In such a case it gets very annoying for the white player.

There is various option where you can prevent your opponent from copycatting.

Who uses the copycat chess technique?

Generally, you will not see this in professional chess tournaments. When both players are professionals then often they don’t go to play the same moves.

Usually, kids use to copycat in chess. Also, we see copycats often in online games as it is easy to play the same moves.

Also sometimes it is better to play the same moves as your opponent when you don’t get a perfect plan in any position. Also in some positions, it is required to copy your opponent’s plan.

How to Beat a Copycat Chess Player?

This will guide you on how to defeat a copycat chess player.

Take a Pawn Break in the Center

If your opponent is using the same moves, then you can try to take a center pawn break. When you do this, your opponent cannot do the same as in most cases, you will get an extra pawn or piece.

Also, taking a pawn break in the center gives an additional space advantage. Playing in the center is also valuable to improve your piece placement and pawn structure.

You can also try to get a decisive advantage if your opponent made some mistake. Let’s see it with an example.

The above position is from Four Knights Variation in King’s Pawn Opening. Here white strikes with d4 in the last move. If black wants to copycat then black has to play move d5. But wait, that will be the massive blunder in the opening.

If black plays d5 then white can simply take d*e5 and white is fine. So you can see in most positions, it is not possible to play the same moves.

If you know your opponent plays the same moves then you can play some unusual or aggressive openings against them. There are various chess openings in which you can avoid copycatting.

The most effective way is to play 1st move e4 and then 2nd move d4. In that case, it is very difficult for your opponent to play the same moves.

But remember, it is very important to know the opening theory when you are experimenting with such things. Instead of going for unusual openings, you can go for aggressive openings. Usually, when you play aggressively, the opponent has to find some defense and thus he cannot copycat moves.

Read the following two blogs on the most aggressive chess openings.

This is also a very important mindset, especially for kids. Many kids and their parents think that the opponent is using some technique. But in reality, opponents copycat moves because they are unaware of the theory.

So the best way is to don’t be afraid of your opponent in any way. In most cases, your opponent will get the worst position quite easily.

Another way is to prepare before the round. Check your opponent’s game, and openings and understand his level of play.

This is also a great way to defeat such types of players. You can simply start playing aggressively. Make strong plans and start an attack. By doing this way, you can force your opponent to play defensively.

Although to play aggressively, you have to solve a lot of chess puzzles.

Also, to play attacking chess, you have to play and choose openings accordingly. If you choose a very passive opening then you cannot start the attack.

It is always better to play openings that come under your comfort zone. If your coach or friend is forcing you to play any opening then don’t listen to them. Play what you want!

Probably Your Opponent Doesn’t Know Much About Chess

This is a funny reason but true. As I said, most of the players who do copycat, don’t know a lot about chess. They have just started or just trying to play some gimmick to use against you.

In such cases, it is important to understand whether he plays chess or not, what is your opponent’s rating, etc.

Once you make sure that he is a beginner, start playing confidently and quickly. In most cases, your opponent will make a simple blunder while doing a copycat.

These are 5 points that can be useful for any level of play. Also, this is useful in any type of game. Whether it’s classical, blitz, bullet, or rapid!

Advice to Players Who Copycat in Chess

The copycat technique will make anyone a poor chess player. The chess community is very small and this type of news spread very quickly. Also, it is not advisable to copy the opponent’s move and play without thinking.

In some cases, it works perfectly. If you know the exact theory or you have analyzed the position then it’s absolutely fine. Otherwise, it is always risky to copycat your opponent’s moves.

Lastly, I would say, instead of doing this, focus on improving your opening, middlegame, endgame, etc.

The conclusion is very simple. You don’t have to fear if your opponent is copying your moves. You just start playing good moves.

Most often, you will get a better position, and eventually, you will end up winning.

Also, it is important to analyze your opponent’s games before your round especially if you are playing a classical tournament. It helps a lot.