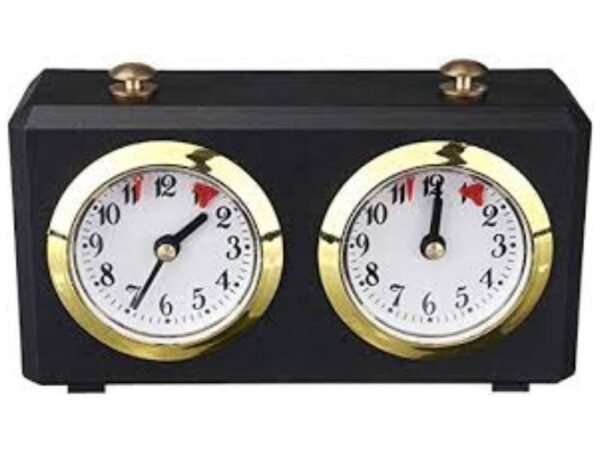 Today I will be presenting you with one of the most essential factors of the chess game – The Chess Clock. Generally, newcomers to the chess world are generally attracted to the machine that the players keep banging once they play their move.

That is nothing but a chess clock. You must be wondering about the reason behind the invention of something like the chess clock. As chess is a game of numerous possibilities, people generally took lots of time to play their moves,  so just to make a specific duration for the game, this invention was needed.

The chess clock was first invented by Thomas Wilson in 1863 when he used the sand hourglass to decide time limits for specific moves. This was not the most accurate way to reduce the span of the game.

Then came the analog chess clock. This clock was first used in 1883 in a top-level tournament in London. This was a big development in the chess community back then. The duration of the game started to come under the limit. 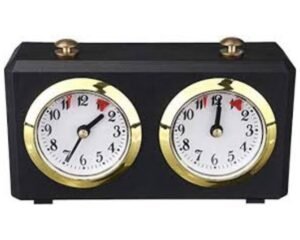 An analog clock was built with two clocks in one machine, the player who plays his move used to press the button above his clock which enabled his time to stop and his opponent’s time to start. In this way, the countdown used to continue until the game ends over the board or someone runs out of time.

Then came the digital clocks. Long back, in 1973. Bounce Cheney was an electrical engineering student.

Once the digital clocks were invented, then came the variants in the chess clock. Early on the time set in the clock was used for sudden death time control. In this, both players were given equal time say 2 hours each. If the game doesn’t end then whomsoever’s time runs out loses was the rule.

Former World champion Robert James Fischer was of the opinion that this was an incorrect time control and presented his own format where a player gets specific time added to his clock, say 30 seconds after each move he makes.

This way the quality of the game was to be maintained. This increment is followed almost exclusively in every Rating tournament.

Chess clocks are also a great gift for any occasion. Here is a list of the best gifts that you can give to someone who is passionate about chess.

There are a lot of other variants in the chess clock. I will present a few of them-

Variants in the chess clock

The sudden death mode gives a player a specific amount of time to complete the whole game. This means that if a player is given 1 hour then there will be no extra time at any interval of the game. The drawback of this mode is that the quality of play decreases when a player is under time pressure, so generally, this is not applied in tournament practice. In 2019 Norway’s elite-level chess tournament applied a sudden death time control.

Fischer bonus mode gives a player increment of specific seconds per move. This increment differs according to the format of the tournament. This additional time helps to maintain the quality of the game. This mode is used in almost all rating tournaments

this mode is seen in a lot of tournaments of the Grand Chess tour league. It is also an interesting variant as the time doesn’t increase But the clock is on hold for the decided delay time. For eg. If the time control is 5mins +3sec (delay). In this case, the clock will stay on hold for a maximum of 3 seconds, and then the time will start running. This time control brings a lot of decisive games.

This time control is the same as sand hourglass but in just the digital way. Suppose the time is set 1 minute each. Then the total time on the clock will stay for 2 minutes. When a player loses on time the time will be 0.00-2.00.

If you want to take the chess game seriously then go for 1st suggestion. If you are a hobby player or a student on a budget then go for the 3rd or 4th option. In this section, we will see the best digital chess clocks. There are also analog chess clocks which you can find on various websites. But I recommend you to buy Digital Chess Clock first and then go with Analog Chess Clock

DGT 3000 is the most popular chess clock. This clock is widely used in every chess tournament including World Chess Championship and also in FIDE official events.

You will see this chess clock most commonly in every chess shop. DGT 3000 offers many chess variants and it is one of the easiest chess clocks to use.

DGT 3000 also connects to DGT electronic chess board and hence it is used for live stream major events.

This clock costs less than 80$ and it is easily available on various websites.

Compare to DGT 3000, this clock is old. Still, you will find all the variants perfect to carry in your bag. DGT is the market leader in manufacturing chess clocks and chess boards. Buy it from here.

It is not the best chess clock compared to DGT chess clocks but defiantly useful for a hobby chess player. The main reason to include this clock in this list is pricing. Mostly you will get this clock for less than $20.

This clock also has all features included similar to DGT.  Another benefit of this clock is it’s handy and lightweight. You can carry it easily anywhere. This is the best and cheapest chess clock ever.

Lightweight, Handy, and the finest chess clock from DGT which costs less than $25.  This is a great little affordable chess clock with a large display and clear digits – perfect simplicity of design and operation.

When you use DGT products, you will notice quality and features.

There are also chess clock apps available on android and IOS. I will suggest downloading the chess.com chess clock app which has a clean UI/UX and no ads! You can download it from here for Android and for IOS

The invention of the clock brought new formats to the game. The classical format back in the 20th century used to be 2 hours per side for 40 moves then 1 hour for the next 20 moves followed by 30 minutes for the remaining game. So all in all it would be a 7-hour game if the players reached the required number of moves within time. We can call it the pure classical format.

Then comes the recent time control of 90 minutes for the whole game with 30 seconds added after every move. This was the recommendation of Bobby Fischer.

Then there is a semi-classical format with 45 minutes for the whole game with a 10/15 seconds increment per move.

Then comes the blitz format which is 3 minutes for each side and 2 seconds increment per move.

And lastly, the Bullet is 1 minute on each side without increment ( I suggest playing this online as damaging the clocks in a manual game is highly possible ).

The need for a chess clock is such that there are a lot of mobile applications on the chess clock This comes in handy as it is not possible to carry our chess clock everywhere.

Chess clocks can be used in other games also such as checkers, backgammon, go, and carrom.

There are many formats in chess where players use chess clocks. Some of the most famous formats are Blitz, Rapid and Classical formats.

In any format, players get equal time. You have to finish the game before the time ends. The Player also gets an increment from move 1. The increment is basically a time addition after every move played. For e.g. In rapid games, players usually get a 5-second increament. It means, 5 seconds are added after each move played and after pressing the clock.

What are the basic chess clock rules?

Here are a few rules which are useful