Today’s article is on variants in chess, I plan to share a few of the interesting variants. Normal chess is itself an interesting game but there are a lot of other ways to play chess. Some of them can be played face to face while a few need to be played online. So for playing these variants there are special rules altered to play them. 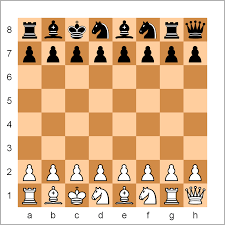 Chess960 aka The Fischer Random is the variant developed by Former World Champion Robert James Fischer. His point was to keep the basic rules of chess as it is and just to shuffle the remaining pieces. This means that all the pawns will stay on the 2nd rank, both the Bishops will be on opposite colors and the King will stay in between the two Rooks. Just to make you all know what exactly chess960 is, this is one of the positions. Of course both the players will have the pieces placed identically.

You must be wondering why the name Chess960, it is because the number of starting positions with the basic rules staying the same is 960. It just shows how rich the game of chess is! To be able to arrange the pieces in 960 ways and also those positions are not analyzed as heavily as the standard chess position.

Benefits of playing chess960 – as the standard chess is explored so much and with engines coming in my personal opinion is we should try chess960. This will give us fresh positions to play and also to play creatively. Generally, we tend to check opening books or refer engines for our preparation but it’s great that the remaining 959 positions are not discovered much. for more information about chess960 click here

A game from Chess960 World Championship Final between Carlsen and Wesley So covered by Agadmator. 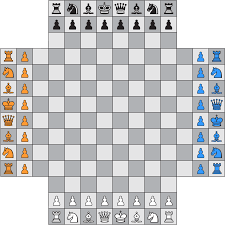 Four-player chess is not yet seen in over the board practice. I gathered information to check where can we play 4-player chess. There are a few options and a lot of rules are varied on each website. Personally, I like chess.com ‘s  4 player chess. The rules are well explained and the clock also makes it interesting.  I recommend everyone to give it a shot at playing this. Depends on your taste you can choose a 2 vs 2 or last man standing. In the 2vs2 game, you can play directly but it is nice to have a friend with you as a partner, the benefit is you can call each other and discuss how to mate your opponents. In the format of the last man standing, it all depends on luck, just the way that if 3 people decide to gang up against you, even luck can’t help you. Click here for more information.

This is a popular format. The rules are of a normal chess game just the fact that white plays 1st move then black gets 2 moves then white gets 3 moves and black gets 4 and so on in which a player can deliver a  check on the last move and can deliver mate whenever possible. This is a good tool to improve creative patters, ideas, forcing moves and you can enjoy discovering while playing!

This is a team game where four players play on two separate boards. Both Bughouse and Supply are different, I feel Bughouse is a bit improved version of supply. Both are possible over the board chess. In Bughouse the team is with 1 white and 1 black, for instance, there are four players wiz A, B, C, D. A and B are teams, C and D are a team. A plays with white pieces and on other boards, B will take black pieces. When A captures a black piece it goes to B and B can use it on his board, so no pieces leave the board as they are used on the partner’s board. There are a few specific rules for this variant so I am attaching a link of rules. You can check it out here.

The reason I like Bughouse or even supply is you need to keep two boards in mind and trade pieces wisely, like until delivering checkmate, Queen is a useless piece, it gets attacked easily by the minor pieces. I feel Rooks are not that powerful as knights or pawns as both these units are much annoying for the opponent. I will suggest everyone play Bughouse online in this COVID-19 situation but once it’s over the fun of playing bughouse/supply is amazing.

Above is the video of World Champion Magnus Carlsen playing Bughouse with other top players.

So these were some of the interesting variants in chess, there are a lot of variants like correspondence chess, crazy house, atomic chess, horde, king to the hill, etc. so I will try to cover other variants in some future articles. I hope I made you curious to play any of these variants. Do continue following our website for more interesting articles.