Welcome to our new series legends who were near world champions! We will cover various players in the coming articles. The first one is easy to predict – Paul Morphy.

Paul Morphy was born in New Orleans, United States of America 22 June 1837. He belonged to a wealthy family. Former world champion Bobby Fischer ranked him in the top 10 greatest players in history. He completed law from university at the age of just 20. In 1858 Paul Morphy first time traveled to Europe to play with Howard Staunton. He beat easily almost all top-level chess players in Europe. In 1859 he decided to retire from chess when he was just 22 years old and pursue law practices. In 1884, when bathing he got stroke which leads to his demise. 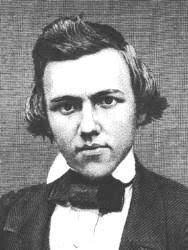 Paul Morphy learned chess at an early age. When he was 9 years old he already became a famous player in his city. In 1850 he defeated chess master Johann Lowenthal when Johann visited New Orleans city. Later in 1857 he received an invitation to play in the 1st American chess congress but he declined, But when his uncle urged to play tournament he accepted the invitation. In that tournament, he won against all players and became American chess champion. Then he stayed in New York and played a total of 261 games.

In Classical games he scored 87 wins, 8 draws and 5 losses. Morphy went to Europe to play many strong masters. Initially, Morphy set to play a match with Staunton but due to some money issue, the match was cancelled. Then he played a match with Daniel harrwitz in one of the café in Paris and defeated him.

In Paris Morphy suffered influenza and lost a huge amount of blood. But at that time also he played with Adolf Andersson and beat him With a score of 7 wins and 2 loss. After the match, Adolf Anderson said that “Morphy is the strongest chess player he has ever seen”. Then he played various exhibition matches and simultaneous displays in Europe. Though Morphy never became official world champion as there was no official world championship match at that time. In 1859 when Morphy was just 22 years old, Assembly in Paris declared him as the best living player in the world and world champion in chess. Although it was unofficial.

In the same year, he returned to America, and then he got various brand endorsements and newspaper interviews. In 1859 he declared himself as retired. This decision may be influenced by Staunton not turning up for the scheduled match. This might have made a poor impression of the chess fraternity. After retirement, he played some exhibition matches and started his law practice. Due to the civil war, he could pursue his law practices properly. His brother already joined the military and his mother and sister emigrated to France. After he failed to set law career some people told him to join again in chess, But he refused. In 1883 he met world champion William stories in one tournament.

Playing style and my thoughts

At that time opening theory was not developed properly. Still, Paul Morphy was playing brilliantly. Morphy’s playing style was creative attacking and he was the first top-level player to play such high-quality games. Fischer, in one of his interviews, stated that Morphy had a talent to beat any player in the modern era if he got proper opening knowledge. In my opinion, at that time Morphy should have continued chess. It would have produced a lot more Gems than the ones we see. Many people say that the quality of opposition Morphy faced was not that strong, but I think that we should think of the things which were in his hands and not that he had no caliber of beating strong opponents. He gave his best by playing some Gem games. He did make those moves that were required to produce such good games.

If Morphy had continued chess, he could have become the 1st official world chess champion. This of course could have changed the whole history of chess till date. The qualities like understanding your opponent well, playing creative chess, using one’s own strength, the ability to bounce back.

Every coach recommends to every chess player to know the classics well. In some of his games paul has played “piece odds” which means a piece down from first move. So here are some of his best games according to me.