Continuing the series of Legends who were near world champions! Today we cover Paul Keres, The Crown Prince of Estonia.

Paul Keres was born on 7 January 1916 in Narva, Estonia. His father and brother taught him the basics of chess. As he lived in a small town, chess literature was scarce. He had to make a lot of effort to gain knowledge about the game. Keres started solving puzzles daily in the newspaper. After their initial education, Keres studied Mathematics from 1937-1941 at the University of Tartu. He was a strong Grandmaster + a good chess writer! Paul had two nicknames given by the chess fraternity – Crown Prince of Chess and Paul The Eternal Second. The reason behind this is assumed to be his luck factor where he couldn’t win the world championship qualification match i.e the candidates at 5 intervals which made him end up as a runner-up. Paul is one of the few players who have beaten 9 or more world champions.  He was in his peak form from the 1930s till the 1960s.

Making a mark at the top level

Keres slowly but steadily improved his play and used to win significantly at school-level tournaments followed by other events. His major breakthrough came when he won his first Estonian National Championship in 1935. This was followed by a lot of good performances. Then he played on Board 1 at Olympiad which was held in Warsaw in the same year. With a lot of good performances following up Keres was making a mark on the map of the chess world. In 1936, Munich Unofficial Olympiad Keres won a Gold medal on Board 1. He made a strong contribution to the team when Estonia won the Bronze in 1939, Buenos Aries.

With Keres in peak form and proper age to fight for a world title, things started to get complicated. World War 2 happened. Keres was playing frequently but the problem was that his country was initially conquered by the Soviets then by the Germans and finally again by the Soviets. It is a mystery that immediately after the world war ended, Keres was rarely winning events. He started to have surprising results. In one of the candidates, Keres lost 4 games to Mikhail Botvinnik. It is suspected that Keres was being forced to throw points to the ones who were eventual winners of the tournaments. These events started to happen at recurring intervals. Keres used to get setbacks and rarely win tournaments. The string of constantly being either the runner-up or the joint runner-up got him the nickname “Paul the Eternal Second” by chess players and followers.

Improving results with the change in federation

Once Estonia became a part of the Soviet Union, Keres won Soviet championships thrice. Keres represented the Soviet Union in 7 consecutive Chess Olympiads after this merger. The success was mind-blowing. The Soviet Union won all the titles and Keres won 6 individual Gold Medals and 1 Bronze medal. Since 1955 his charm was back. He was winning tournaments regularly and it can convince us that the threats he must be received at that time must have taken a halt. Then there was no looking back. Keres won a lot of elite-level tournaments, the list is unending. Although he never won the world title he did beat 9 world champions. So he was in no way inferior to them.

Since 1973 Keres started to have health issues due to which he did not play any major events in 1974. In 1975 he won a major tournament in Tallinn. Within a few months at the age of 59 Chess lost a legend. While returning to Estonia Keres suffered a heart attack and lived his last breath there. There is another theory that he died on the same day in Vancouver [Canada].

Paul Keres used his knowledge and understanding to write some very nice literature in chess. Following are his books –

Keres was a living example of the statement “With being a good sportsman you should also be a good human being”.  When Keres tragically died in 1975 due to heart attack. There were more than 100000 people who attended the funeral ceremony. The government issued a postal stamp as well as a currency note dedicating it to him. To add to it a bronze statue was made on his 100th birthday on 7th Jan 2016. This just shows us Paul Keres must be a gentleman!

Another achievement is one of the variations in Sicilian is named after Keres which goes- e4 c5 Nf3 d6 d4 cxd4 Nxd4 Nf6 Nc3 e6 g4. The main plan of the Keres Attack is to start an attack on the kingside. Black has to play preciously to maintain equality. 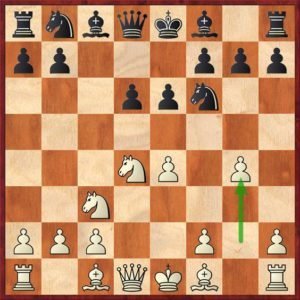 To conclude we can say that Paul Keres was a deserving Candidate for the World Champion’s List. Also huge respect for the Estonian public who have embraced their Gem and have given tribute to him. If you want to read more info about Paul Keres, I would highly recommend you to read chess24 series on Paul Keres.

This post is first published on www.chessarticle.com and written by Akhilesh Nagare.