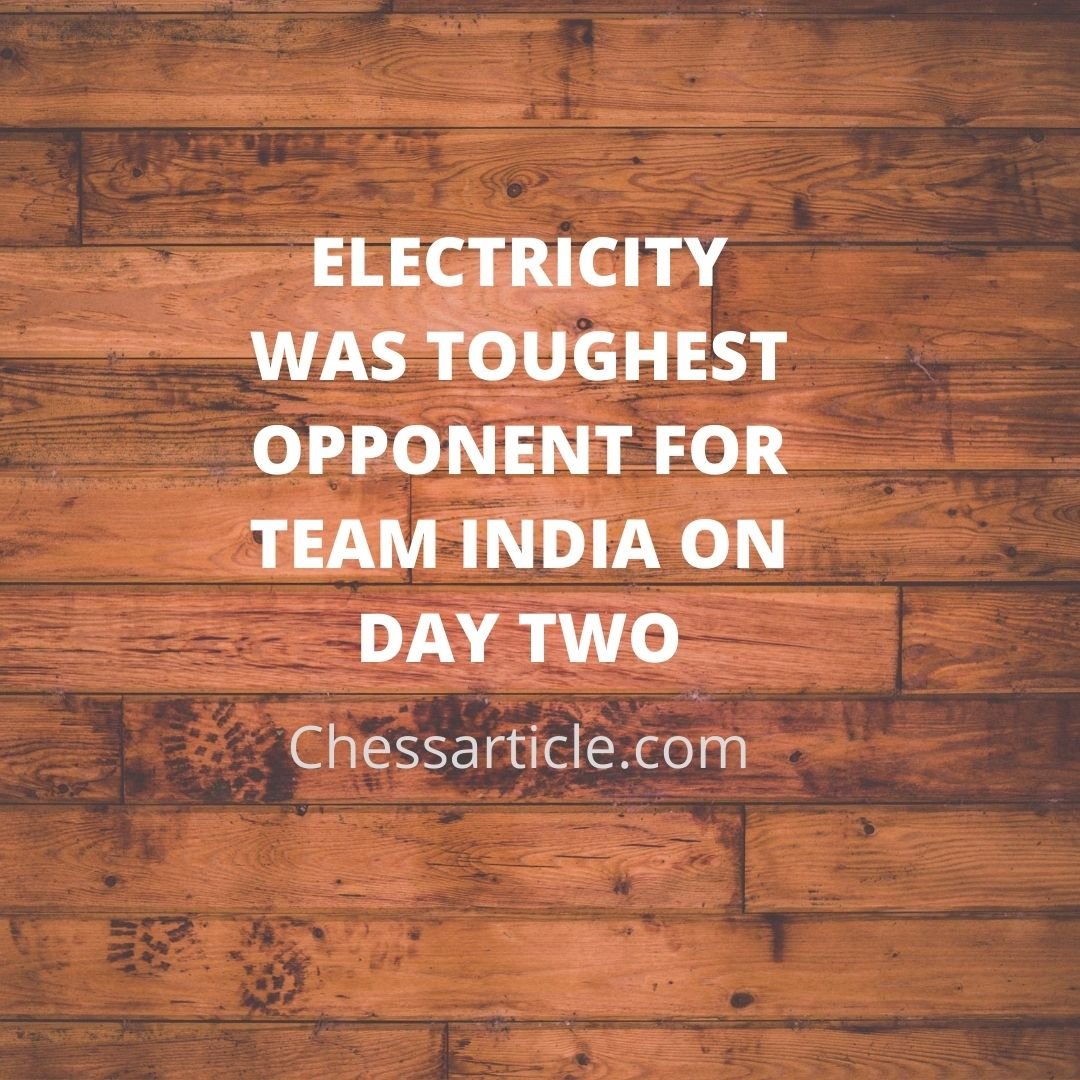 The heading of the article explains everything. After beating Indonesia and Iran, Team India looked in a good position to make a clean sweep against the weaker opposition viz. Mongolia. When India was leading 3-1. Suddenly Koneru Humpy lost on disconnection and it came down to Vidit’s game wherein a winning Rook pawn ending even Vidit got disconnected. This is a big blow to Team India. Let’s read the full article followed by some tactics and interesting games from Day 2. There are a few updates regarding the loss of Vidit and Humpy against Mongolia, you can check that in this report.

The scoreline does not really tell the exact story of the match. It was a match full of nerves! Playing on top board Vishwanathan Anand made a quick draw with black against Susanto Megaranto. Even Vantika drew her game, then it was Bhakti Kulkarni who won an amazing attacking game. The score was 2-1 in Team India’s favour. While Praggnanandhaa was having a pleasant position, our Team Captain Vidit Gujrathi looked in real trouble. But he managed to swindle it and make it 3-1. Dronavalli Harika was an exchange and a pawn down! Things looked bleak for her but she kept fighting on and drew! 3.5-1.5 which meant India did win the match and Praggnanandhaa extended the lead to 4.5-1.5

Before this round, Iran was not in good shape, so everyone expected it to be an easy outing while it was far from the truth. Koneru Humpy and Nihal Sarin drew their respective games. Once again Harika was the first to land a winning blow. And Vishwanathan Anand was also better if not winning but as his opponent is known for finding resources, Parham Magshoodloo did muddy the waters and in no time the tables were turned. Anand had no chance and just resigned the game. 2-2 with Harikrishna and Vantika playing. Vantika found out some amazing ideas to trap her opponent’s king this winning the game. Harikrishna was the last one to convert a fairly unclear ending. Thus India did win 4-2 but it never looked easy.

Now, this was the real shocking scenario. After a tough game, Anand was rested and Vidit took charge of the top board. The star of this round was Divya Deshmukh as she made a quick wrap of her opponent in mere 15 moves. That game is Added in miniatures section. Arvind and Praggnanandhaa also won their respective games. While Vaishali was in full swing to attack at a point where things went out of control she could have accepted the repetition but maybe she did not know that India was already leading heavily and decided continued the game. Koneru Humpy was a clear pawn up and being the Women’s World Rapid Champion everyone did expect to her to convert this position.

Now, something very unusual happened. Humpy got disconnected and lost her game while even Vaishali lost her game after blundering a Piece. Now suddenly it was 3-2 and Our Captain was fighting it out. Any given day it was a draw with Rook 3pawns each. Vidit kept trying and also converted it into a 2 vs 1 rook pawn Endgame. But even Vidit got disconnected and the final score was 3-3! The saddest moment for all the Indian fans. No way could Humpy and Vidit have lost their games. It just proved that the Internet was a tough opposition than the players. Mongolia was definitely not the team to have a draw with. Everyone was expecting a 6-0 so 3-3 was a huge shock. But internet disconnection is a part and parcel of online games and one can’t help it. Let’s hope that Team India will leave back the upset suffered today and bounce back as they face tough oppositions tomorrow.

According to Chessbase India – Vidit Gujrathi and Koneru Humpy did not lose due to disconnection but there was a power failure in their respective places at the same time. The eventual result cannot be changed but we wish our team will bounce back and qualify for the next stage today.

The following are 11 tactical positions to solve. After solving you can check solutions at the end of this article.