There are many reasons people are playing chess.

Chess has a very much old history. Many experts say chess was invented before Christ. There are many stories about the invention of chess. The earliest origins are uncertain. But back in 6th AD, it is traced that chess was played in India. From there it continued to Persian countries and then to Europe and USA. But real professional chess started in the 17th century. At that time tournaments were started. In world war 1 and world war 2 chess has suffered. We lost many top players in those years. The first world championship happened in 1886. Since 1950 chess is continuously growing.

As we saw above chess was invented in India. But due to lack of resources such as shelter, minimum wage, food chess demand decreased. But when India got independence chess boom period started. The first national championship happened in Eluru in 1955 won by Ramchandra Sapre. In 1986 Vishwanathan Anand became Grandmaster and that was a turning point for Indian chess history. When Vishwanathan Anand became Grandmaster people started to think and getting more serious about a career in chess. In the year 2000, India has only 5 GMs. After the year 2000,  Indian chess started growing rapidly. In 2018 India got the highest number of grandmasters in a single year. Currently, India has many grandmasters who may become world champions. Government jobs are one of the main reasons for the boost of chess in India in recent years. Following is a yearly graph of the Indian grandmaster 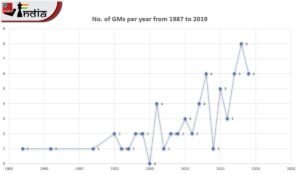 In the last month of 2019, China got the 1st patient of coronavirus. After a 2-month virus got widespread in almost all countries leading to compulsory shut down on on the board chess. The last big tournament in the world was FIDE candidates 2020, but that tournament was adjourned half way due to Russia (host country) announcing lockdown. But chess is the only game that we can play online and practice at home. Taking this advantage many people started to take online tournaments on platforms like lichess.com, chess.com in all formats (Rapid, Blitz, classical).

Many organizers organized Free tournaments, Many took entry fees and gave prizes ranging from 50USD to 5000 USD. In this pandemic time, many online classical tournaments were organized with the help of a zoom video call. The first organizer was Sunway Sitges chess online festival. World Chess Federation also took some events such as the Nations Cup and now the upcoming Olympiad and Women Grand Prix. 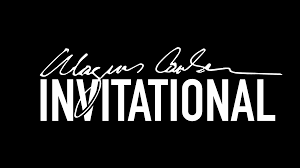 But the biggest gamechanger in online chess happened when world champion Magnus Carlsen declared tournament with a prize fund of 1 million USD in which he is taking 4 tournaments and 1 final tournament. Alongside this event there are many top-level events that happened or planned such as chessbrah invitational, Mr dodgy invitational, clutch chess, titled Tuesday, titled arena on lichess.org.

Current situation of chess and the future of chess

Currently, many countries are still affected but the good thing is that in Europe some countries started conducting over-the-board tournaments. But still, many major countries such as Netherland, USA, India, UK are still suffering and it is impossible to organize over the board tournament in these countries. But all chess players have to wait until the vaccine comes. As soon as the vaccine will be distributed, the chess tournament will start again.

I believe an online chess tournament is a new invention in chess culture and that will continue further also.