Their full name of Ian is Ian Alexandrovich Nepomniachtchi and he is one of the strongest chess grandmasters In Russia. Ian was born on 14th July 1990 and he is a strong super grandmaster in the world right now. Ian was born in Bryansk, a city in Russia.

Bryansk is 400km southwest of Moscow. Ian Nepomniachtchi got his GM title in 2007 after scoring three GM norms. Ian has recently won the candidates tournament and in the upcoming months, he is going to challenge the World Champion Magnus Carlsen for the World Champion title.

There are many fascinating facts you didn’t know about Ian Nepo Nepomniachtchi and we will be covering all of those facts in the article.

So, read the article carefully until the end and you will get to know some nice new facts about Ian Alexandrovich Nepomniachtchi. He has finished second in world championships while Carlsen was first. 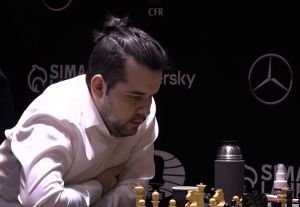 Ian has an Elo rating of 2792 in classical chess format. This rating is the highest rating of Ian’s chess career in classical format and currently, he is in 4th rank in the world. We hope that Ian will reach the 2800 Elo rating in the future. Ian has a best Elo rating of 2821 in rapid chess time format. He has crossed 2800 in a rapid format. In blitz, he has the best rating of 2820 and by seeing these ratings we can surely see how strong Ian is. Ian was ranked fourth in both Rapid and Blitz in 2016. He is quite active on Twitter and can be seen doing some tweets.

Ian Nepomniachtchi won the European Individual Chess Championship in 2010. He won two individual titles in the same year. This championship is organized by the European chess union and many strong players play in this tournament. He was not even 20 years old at that time and it is not at all easy to win such big chess tournaments.

Ian is an aggressive player rather than a positional. One main thing is sometimes he plays very fast and being ahead of time from the opponent is beneficial most of the time. Ian mostly starts with 1.e4 as white and 1.c4 as black. He likes to play Sicilian with an occasional french against 1.e4.

Ian won the Tal Memorial in 2016 with a score of 6/9. Tal memorial takes place in the memory of Mikhail Tal, who is famous for his piece’s sacrifices. Winning Tal memorial with a good score is quite good.

Ian Nepomniachtchi started playing chess when he was 4 and a half years old. Ian’s grandfather was a famous chess teacher and he was also his first coach of Ian. He taught Ian from such a young age. Ian got trained with his first coach until he turned thirteen.

Winning Under-10, Under-12 Championships While Ian was a teen and doing his studies, he got to know about the Dota game. His love for these games kept on increasing and in 2011 he won the ASUS Dota cup with his teammates. Ian Nepomniachtchi also did the commentary in a Dota tournament in 2018. Ian still loves this game and we don’t know if he still plays it or not.

Candidates Tournament held to challenge the current world champion. Some best and strongest chess GMs play in this tournament and Ian Nepomniachtchi has won the 2020-2021 candidates tournament. He will be playing Magnus Carlsen for the world champion title in November 2021. There will be 14 classical games this year. These games are going to decide the next world champion. We are very excited to see them playing and we are damn sure that you are excited too.

Ian Nepomniachtchi won the silver medal in the World Rapid Chess Championship which was held in 2015. Ian is good in every chess format. He won the Moscow blitz tournament which was held one month ago.

Ian also played a world championship match against Magnus Carlsen who defeated him with a huge margin. Still, Ian attended all interviews and behaved very well.

These are some facts about Ian Nepomniachtchi. We are sure that you surely got to know about this strong Russian chess grandmaster. Ian Nepomniachtchi is the strongest GrandMaster right now in Russia. We will get to know who the next world chess champion is in a few months. We will come with some other articles about chess players. Hope you like the article and thank you for reading it.