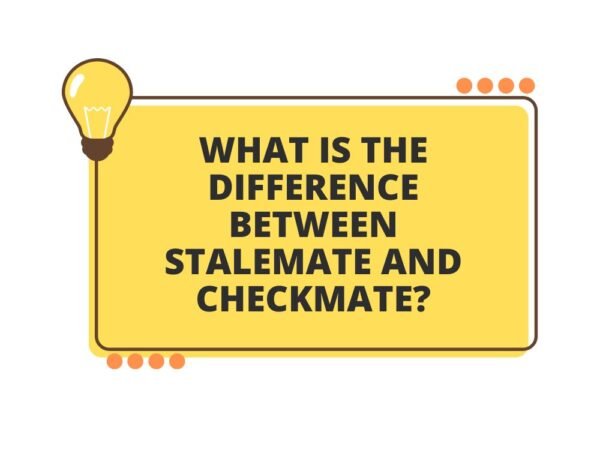 A stalemate is basically a chess position in which no pieces can be moved without any check. When this position arrives on the board, both players cannot do anything, and hence they have to agree to a draw.

Sometimes stalemate can get funny. There are also various types of stalemate which we will discuss in the following position.

Look at the above position. This is the very basic stalemate position. This position is white to play, and you can see white cannot move his king to any of the squares. Hence, both players have to accept the draw. Let’s see how this position arrived below position.

Look at this position; white played the last move Qf2, and black doesn’t have any good option other than taking white’s Queen. Once black takes a queen, it’s a stalemate position which we have seen above. If white didn’t play Qf2, then the position is already in black’s favor as black is two pawns up. But white played Qf2 and achieved a draw.

Look at the above position. White played the last move, Qe7+, and black didn’t have any valid move to play. Hence it is a checkmate.

For readers of this article, we have created a list of curated 5000 chess checkmate puzzles, which are absolutely free. You can get all puzzles by clicking below.

Difference between Stalemate and Checkmate

There are a few major differences between stalemate and checkmate. Let’s see that in the following table.

There are various types of stalemates which are quite interesting. Following are some of the types.

Look at the above puzzle. How can white draw this game? It seems like an impossible task as the black’s next plan is to make a queen and checkmate on the white’s king. But there is a solution. This pattern is called a self-stalemate.

White played Kh4!!. Black is forced to play a3

White played g3!! Now whatever black plays, it is a draw as white cannot move his pieces in the next moves.

This is also a very interesting pattern. Usually, stalemate happens in endgames. But there are a few exceptions in which stalemate happened in the middlegame. In the following games, you will see some of the very interesting games in which a draw happened in the middle game. Watch these games for fun, and don’t implement them in the actual games, as it is not possible to play these kinds of moves from both sides.

This is also a very famous chess stalemate pattern. In this pattern, players start giving checks by their rook, which gets very annoying for the opponent and is also impossible to defend.

Let’s see the above position. In this position, white played Ra7+, and from now white will just give a check and keep the rook in the same rank. Once black takes a rook, it is again a stalemate as white cannot move any piece.

How to avoid a stalemate in chess?

There is no theory for this question. But once you get a better position, your opponent will start to try some cheap techniques to win against you. Hence, accurate calculation and concentration are crucial to avoid getting trapped in a stalemate.

Is stalemate a win?