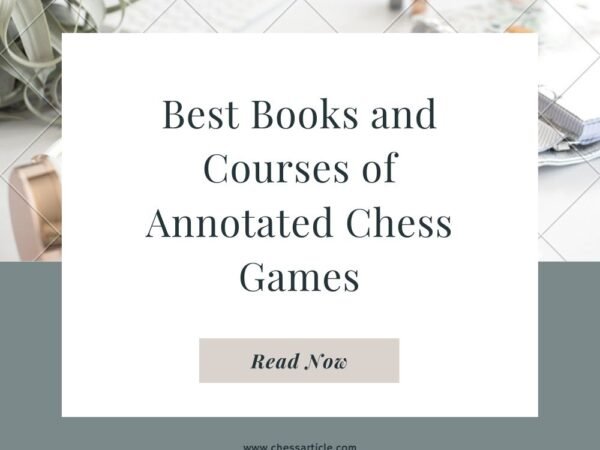 Watching chess games and learning from them is one of the best ways to improve in chess. Various best chess books and courses of annotated chess games will help you learn the concepts quickly.

This article will show eight books and courses highly recommended for every chess player. These books are suitable for anyone up to a 2200 rating.

Why is game analysis essential?

Watching your own games, as well as watching top players’ games and analyzing them, is very much important for everyone. Analyzing helps you to understand more and more positions easily. When you watch top players’ commentary or read a book, you understand various stories, chess variations, traps, etc.

Here are some benefits of game analysis

How to study annotated Games?

Usually, studying annotated chess games is a tedious task. But if you want to improve, you should study it on the board. The first step is to set up a chess board and have a chess book with you. Then select a game of your favorite chess player or opening.

Start watching the game. If you found some exciting positions, analyze them with yourself. Most of the positions in deeply annotated games are already analyzed.

Don’t forget to miss any part of the analysis.

1- My 60 Memorable Games by Bobby Fischer

This book is written by World Champion Bobby Fischer. In his book, he analyzed the 60 best games in his career. This is one of the best chess books which is written by any world champion. This book was originally published in 1969. After some controversies regarding changes in the book, this book was finally reprinted in 2008 after changing the notation format only.

This series is the most famous chess series ever written by any chess player. In each book, Garry analyzes games and talks about their culture, history, and politics.

4- The Mammoth Book of the World’s Greatest Chess Games

This book consists of the 125 greatest chess games of all time, selected, analyzed, re-evaluated, and explained by top-level British chess players. This book is huge, with 704 pages. This book is recommended for everyone below the 2000 rating. This book is written by highly popular Grandmasters Dr. John Nunn and John Emms. Somehow the price of this book is quite low compared to the value it brings.

This is one of the best chess courses I have ever seen. This course is created by GM Avetik Grigoryan and GM Gabuzyan Hovhannes by ChessMood. In this course, both GMs analyzed attacking games. To access this, you have to purchase chessmood membership. We have already written a review blog post on chessmood review. You can read it here. ChessMood claims the following features

Get 7 days ChessMood for Free and watch this course

This course is also created by the chessmood team. This series covers the 100 most instructive chess games ever. They have chosen games from which there are some takeaways. The authors also ask questions many times.

You will learn the following things from the course.

Get 7 days ChessMood for Free and watch this course

In this 16-hour of video course, GM Arkadij Naiditsch analyzed the 50 greatest chess games played by GM Magnus Carlsen. The authors’ analysis helps you to understand how elite chess players analyze other players’ games. By completing this course, you will understand thousands of new ideas, which will open your eyes. You will also get the PGN database of analyzed games and also different chess puzzles from Magnus’s games.

This is also the by far greatest chess series ever written by Boris Gelfand. This series is divided into four parts: Positional Play, Dynamic Play, Technical Play, and Major piece endgame play. Boris Gelfand also played in the world championship in 2012 with Vishy Anand. This book is recommended for above 1600 chess players. You can purchase all of this from Amazon by clicking this link.