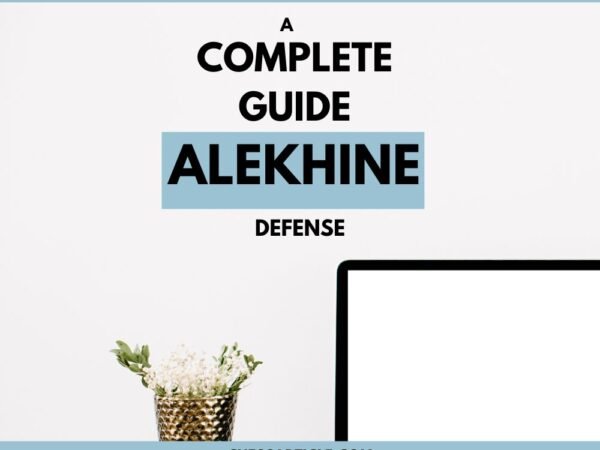 Alekhine Defense is played against 1.e4. After e4, black replies with 1…Nf6. This opening was named after former world champion Alexander Alekhine started playing it. Alekhine Defense is one of the popular openings in older times. Due to recent changes in modern chess, new technologies, and modern engines, the Alekhine defense is not as popular as it was.

Black’s theme is to attack the center pawn on 1st move itself with the knight. White then pushes the pawn to 2.e5.

In reality, black just waste two moves at the start of the game. Also, the knight on d5 becomes weak in longer terms. There is absolutely no point in playing Alekhine defense in classical games. You can play in Rapid or Blitz games. Some of the players still like Alekhine defense. In this article, we will see how to play against Alekhine Defense. Also, we will see the best books and courses to prepare for this opening from both sides.

Almost every line in Alekhine Defense is minus for black if white know little theory.

There might be some reasons that people choose Alekhine Defense. Many people love Alekhine as a player, so they try copying their style. Some players didn’t know the theory and consequences of playing this opening.

Those who have a chess coach will never suggest playing Alekhine Defense. Many chess players will not like this thought, but in reality, almost all positions that arrive from these openings get better for white.

Many players don’t have proper chess knowledge; they usually watch streams and some random videos where streamers play Alekhine for fun, and players just try to copy it.

How to Play Against Alekhine Defense?

This is very important. First of all, you should play and choose a very simple setup and don’t do any complications. There are many multiple variations in Alekhine which are not good for white.

It is important to play 2.e5.(See Diagram). Black is forced to move the knight. After that, white has two choices. 1st one is to play classical variation, and another one is to play four pawns attack. Four pawn attack is very risky for both sides. White is obviously better in that line also, but why take risks when you can play simple chess and get a a better position anyway.

After black’s 2nd move Nd5, white should play d4 and then Move bishop to e2, knight to f3, and then short castle. This is a force move order. Black cannot stop it. Black will also start to develop their pieces. After which, you have to start an attack on d5 knight by playing c4!

Here you finish the basic plan. After that, you need to develop your pieces, connect both rooks and start an attack in the center. Black’s position gets collapses sooner or later.

In the opening phase, remember to castle and make your king safe. Then you are ready for attack in the center. This is the easiest way to beat the Caro-Kann defense.

Four Pawns Attack starts with 1.e4 Nf6 2.e5 Nd5 3.d4 d6 4.c4 Nb6 5.f4. In the above diagram, you can see that white develops his four pawns in the center and starts an attack. This opening is dangerous for black. If black knows the theory accurately, black can equalize.

Many players choose this line over the classical opening because of white’s sharp and tactical play.

In Brooklyn Variation, black just moves his knight back to g8. This is an absolute waste move. After two moves, black gets nothing, but white’s e5 pawn becomes very strong. There are many games played in this variation, but every game went well for white.

Black only hopes to try to weak e5 pawn and start putting pressure on e5. In reality, white can just play Nf3, and everything is perfect for white.

In the above position, you can see black played Ng8, and now it’s a starting position for black but for white, he already gained two moves.

This opening starts with 1.e4 Nf6 2.Nc3 d5. In this variation, white’s 2nd move is Nc3 and not e5. Because of this, black can claim the advantage by playing d5. After d5, if white plays e5, black can reply with Ne4, which is not very good for black. Still, white is better in the position, but black gets good hope.

The name is derived from the Scandinavian defense, which actually starts with 1.e4 d5, 2. exd5 Qxd5, and so on. This variation is somewhat similar to Scandinavian Defense as black play d5 in both openings.

Again, if you want to refute this from the white side, play 2.e5 instead of 2.Nc3.

This variation starts with 1.e4 Nf6 2.Nf3. White sacrifices an important e4 pawn and ends up in a very bad position. The thumb rule in the opening is never to sacrifice a pawn in the center. In gambit lines, usually, players sacrifice side pawns by playing b4, etc.

From the black side, the position becomes very good after capturing the free pawn. This opening can also come from Reti Opening, where white starts with Nf3 Nf6 and then 2.e4.

Many players give this center pawn in the hope of development. They think that it is okay to give one pawn. But remember that the value of one pawn is like 4-5 moves. If you are getting 4-5 moves positional advantage, then only give sacrifice.

In the above position, black can start developing the pawns to d5 and c5. After that, black could develop bishops and do short castles. White cannot do anything. Instead of calling this variation a gambit opening, we can call it a blunder.

Various chess books are available on both the white and black sides to prepare for Alekhine Defense. I don’t recommend preparing Alekhine’s defense from black, but I still suggest a few books. The only advantage for black to play Alekhine is it is easy to play and prepare this opening.

The Alekhine Defence: Move by Move

This book is published by Everyman Chess under the series move by move. This is a very popular series where all the basics of the opening are covered. Cyrus analyzed this opening in this book and covered all the basic ideas. This book is perfect for beginners who are looking forward to playing Alekhine Defense.

Cyrus Lakdawala is a very famous chess author who is a candidate master from Canada. He has written more than ten books in the past and is one of the most active authors in the chess world.

Buy this from Amazon

This book is written by Christian Bauer, who is a very strong chess Grandmaster. This book is also recommended for the black side. This is the updated and latest version to prepare Alekhine Defense. However, this book is suitable for club-level chess players and above. Christian is known for his offbeat preparation and still outplaying opponents. He played sidelines hundreds of times and won with world-class chess players.

The author is also a French Chess Champion and played Olympiad for his country.

Buy this from Amazon

I believe that you will not need to purchase any Alekhine Defense courses to prepare from the white side. Just watching a few free youtube videos works fine. I am recommending three videos that you can watch.

Crush the Alekhine and Scandinavian!

This opening course is published on Chessbale. In this course, the author explained all variations arriving from Alekhine and Scandinavian Defense. The author also claims to get an advantage in every single line. As I said, Alekhine is already much better for white.

Buy this from ChessAble

This is a complete chess course to prepare Alekhine’s defense from the black side. But obviously, this course is very expensive. You can just purchase a move trainer version of this course which costs around $25-40.

Buy this from ChessAble

Is Alekhine Defense good for white?

Absolutely, there is no doubt about that. After 1st move, white should continue with 2,e5, which gives a clear advantage for white. If someone played Alekhine against you, you should aim for a win and not settle for a draw. Although sometimes it gets tricky if you choose to play risky variations such as four pawn attacks. White should play every simple chess and try not to make any obvious mistakes or passive moves.

How to beat Alekhine Defense?

To beat Alekhine’s defense, the best way is to advance the pawn to e5 on the 2nd move and then develop your pieces and start the attack. There are many variations in which white gets a very comfortable position, and white can aim to win easily.