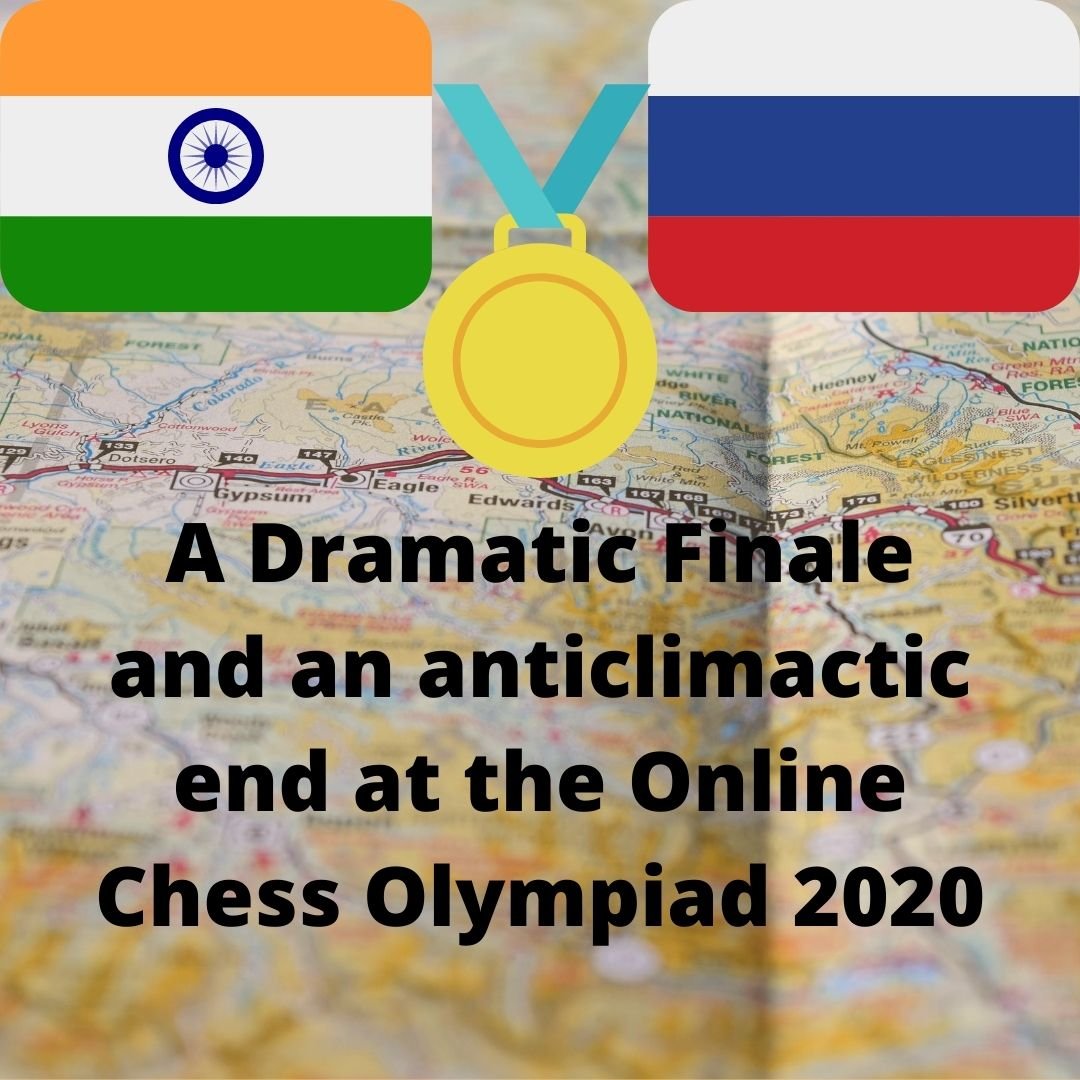 The online Chess Olympiad started officially on 25th July. The format was interesting, a lot of variations in playing format, also the time control, everyone had to start wondering about their internet, their electricity etc. Everyone was faced with the same issues. In some places, the federation took care while in others the players had to make their own arrangements. Sadly, Team India comes in the latter category.  The Olympiad Finale came down to Two powerhouses in Chess- Russia v/s India. They made their way to the finals with a tough semi-final. Russia was the clear favourite on paper. Their average rating was whopping 2599! While Indian average rating was 2412. But the rhythm with which team India reached the Finals everyone knew it could be any teams day. Let’s see how the games went. Here is some forecast by Vladimir Kramnik, Former World Champion.

Vladimir Kramnik can foresee the future! 😃

When Kramnik was asked about his thoughts on the match while the first round was in progress between India and Russia, he said,”Personally I hope both teams will win!”

Vidit playing top board against Nepomnichtchti meant Vishwanathan Anand was rested for the first round. Vidit was extremely well prepared in the Grunfeld. Nepo took his time at regular intervals and at a point, it felt that Vidit would bring the full point with 15 mins to spare. The cheering of “INDIA INDIA” began in my mind. Here we have to appreciate Nepo, he made good use of the consumed time. And once Nepo found Rxf2, things began to become shaky. Vidit gave his best but could only force a draw. During this game, a lot of people said Vidit missed a win he was +8 etc… The position was so messy it’s tough for players to manage it in such a shorter format. Even Humpy and Praggnanandhaa got winning advantage but maybe the nerves got better of them. On the other hand Harika, Harikrishna and Divya played well to draw their games and suddenly it was a 3-3 draw. This was the first match where both India and Russia failed to win a game!! All 6 draws showed how deserving the teams were to reach the finals. 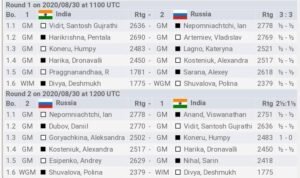 Anand took the charge of Board one as Harikrishna had to get back to his Polish league match. Nepomnichtchti is known as Anand’s Nemisis and that is no secret to anyone anymore. Also, Anand had the black pieces. But Anand made the draw look effortless. Vidit on the second board drew with Danill Dubov who was the World Rapid Champion in 2018-19. Harika drew Alexandra Kosteniuk in a game where she was slightly better. So far 9 draws. What a finale! Here comes the biggest drawback of this event. Things which were not in control started to take over. Nihal and Divya who were low on time got disconnected and lost. While Humpy was also disconnected but she managed to rejoin with only 18 seconds to spare. She fought hard but defending against Goryachkina with so less time was quite difficult. Now the score was 4.5-1.5. Russia had won it. But as it was an issue which was not in team Indias hands, they filled an appeal.

The Appeal and its impact –

We don’t have the exact information of what the appeal was, but if we place ourselves in Team India’s situation, we also would have appealed about maybe a rematch on the two boards or anything which was in our hands.
The point where Divya and Nihal lost on time. There were 67000+viewers on ChessbaseIndia channel. Everyone took to Twitter to inform that there was a Cloudfare issue. There were a lot of tweets, emails to FIDE etc. All the top officials of FIDE came to look into the matter. The situation was tense for reasons. –
1. Although Russia won the internet issue was not only up to the two players but worldwide. Not only chess.com but also various other sites suffered.
2. Just before disconnecting Nihal had got things under control and Divya was winning. So a probable result would have been 3-3.
3. This issue didn’t have a simple solution considering the fact that the Armenian team’s appeal was turned down a few days back.
All the formal procedures were done and Then Emil Sutovesky tweeted something which gave Indian Team and also the fans a big relief.

Breaking news to be announced within minutes. Stay tuned! #ChessOlympiad

As the situation was complex and no readymade solution was available, Fide came up with a unique solution. Something which overwhelmed the Indians but disappointed the Russians as well as the Armenians.

FIDE President Arkady Dvorkovich made a decision to give gold medals of FIDE Online #ChessOlympiad to both teams – India and Russia. More details & an official statement to follow.

India had won the GOLD jointly with Russia !! This was just wow when I read it on Twitter. It was pretty tough to digest this solution. Mixed emotions ran through my mind, things like India wins Olympiad gold for the first time, wow! Also is this the best decision, probably. Also, How on Earth did Russians accept this? Lastly, how will the Armenian Team react now? As an Indian Fan, I was and I am still overwhelmed. But I wish to present a few views of mine.

Pros of the Online Chess Olympiad

1. With Covid-19 still, a problem there had to be a near substitute to OverTheBoard Chess. Online Chess and that too online Olympiad was a bold decision.
2. Reaching a point where 67000+ live concurrent viewers on ChessbaseIndia and a lot on other streams as well proved that India is now accepting Chess as a public sport.
3. India winning the Gold immediately on the next day of National Sports Day.
4. Fans showing huge support when the internet crash took place.

Congratulations to our chess players for winning the FIDE Online #ChessOlympiad. Their hard work and dedication are admirable. Their success will surely motivate other chess players. I would like to congratulate the Russian team as well.

As each coin has two sides, I also like to share the points I thought when I tried to be in Russia or Armenia’s shoes

Cons of the Online Chess Olympiad

1. I feel this decision to be unfair for Russians. Sharing Gold Medal feels incorrect. If India was on the side of winning and would have been forced to share the Gold due to the same circumstances would we have accepted the result in the same way as we are doing now?
2. If this solution applied to Indian circumstances, then what was exactly the issue with Armenian Team?

#ChessOlympiad Daniil Dubov to Emil Sutovsky: “It was a failure because you don’t call such a circus an Olympiad.” pic.twitter.com/iGkm4duOIF

Chess is still not getting the coverage it deserves. But I feel this is a small step to a bright future for Indian Chess. Luck smiles on everyone some or the other time in life. This time it was for Team India. So I feel that the decision taken by FIDE should not mar the efforts put in by the players, captain, vice-captain, all the people who supported chess by streaming also the fans who made conscious efforts when it was required. Also, Indian Captain Vidit Gujrathi said on his celebration stream, it was his Father’s Birthday on the same day. An amazing Gift by the Indian Captain to his father who turned 61 on 30th August. Now maybe the Government will consider #ArjunaForChess once again.

1. The whole Indian team with a special mention of Vice-Captain Narayanan Srinath. A great person who handled everything to release pressure off from Captain Vidit Gujrathi.

2. Sagar Shah and the whole ChessbaseIndia team with Samay Raina and other Comedians. Making a dream of 67000+viewers live for a Chess event come true.

4. To everyone who took personal efforts to help the players in any possible way, messaged them to cheer them, the people who streamed to support Indian Team, the people who promoted the online chess olympiad at the individual level.
Overall like a lot of Indians, I am happy with India being Joint winners but will be rooting for team India to win the GOLD at the very next olympiad to shut down this everlasting controversy.

I hope what happened today with India and the day before yesterday with Armenia puts an end to this debate: A serious event cannot be held online, at least with the current technical scenario. Match results cannot come down to technical uncertainties. #ChessOlympiad