Ruy Lopez’s opening is one of the most popular openings in the chess world. This opening is played by many strong players such as Caruana Fabiano, Hikaru Nakamura, Ivanchuk, Anand, etc. Almost every top player played Ruy Lopez opening in their career. Ruy Lopez’s line is derived from famous player Ruy Lopez.

Ruy Lopez’s opening is very hard to understand and prepare for both players. There are always novelties and new lines which are coming in Ruy Lopez. Some of these books give a direct repertoire, some of them provide instructive games while some just touch upon key concepts in the Ruy Lopez. 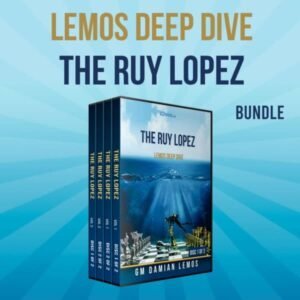 Created by GM Damian Lemos, this is one of the best chess bundles to study Ruy Lopez. In this bundle, you will get 2 courses created by Damian. The course is also filled with various tricks and traps so that you can use them to beat your opponent. Highly recommend it to every chess player who is looking to start Ruy Lopez. By developing specifically-tailored training regimens for every one of his students, Grandmaster Lemos is able to achieve results that other chess coaches dream of.

This book is written by Milos Pavlovic and published by Everyman Chess. This book is perfect for beginners who want to learn how to play against Ruy Lopez. They have suggested a Marshall Attack from the black side which is a very famous defense against Ruy Lopez. The Marshall is a perfect weapon for Black, as it avoids passive positions and the so-called ‘Spanish torture’ of many other variations.

This book is published by quality chess and written by Mihail Marin. Mihail Marin is a well-known Grandmaster and author of many chess books and recorded many chess DVDs. In this book, he covered Spanish Opening which is a variation in Ruy Lopez.
Spanish opening variation is 5th move N*e4. Spanish opening is very much a popular opening against Ruy Lopez. This book is very old but still a gem. I recommend this book for players who got some basic ratings and have some knowledge about chess.

Very different type of opening course. In this course, GM Dejan tries to explain concepts about Ruy Lopez instead of repertoire. According to GM Bojkov, “The more we study and the deeper we dive into the Ruy Lopez the more and more secrets will be revealed and the better the understanding of the structure and the typical ideas would become.” I would highly recommend this course to those who already know the basics of Ruy Lopez.

You can use code NIKHIL45 and get a flat 45% off on sitewide purchases.

This book is published by everyman chess publication. Move by the move is the best series to learn openings for beginners. This book is written by Neil Mcdonald. He is a well-known chess player. The move by move series is my personal favorite and it covers all essential knowledge for beginners. It covers the following things. Again the complete Ruy Lopez repertoire by GM Marian Petrov. Marian is a very famous Grandmaster from Europe and a very famous chess coach. In this course, he divided Ruy Lopez into 10 chapters and he spent around 1 hour on each chapter. You will also receive complete PGN files in the downloadable version. GM Marian also represented as a coach of the Wales team at the Baku Olympiad. Again this course is too deep to prepare for and recommended for those who are looking to go deeper and aiming to become a professional player.

How To Win With The Ruy Lopez Exchange Variation 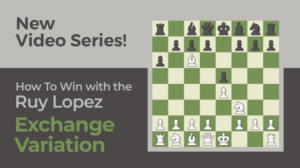 Ruy Lopez Exchange Variation starts with 1.e4 e5 2.Nf3 Nc6 3.Bb5 a6 4.Bxc6. This is the safest option for white to play in Ruy Lopez. Black usually don’t get anything if white played properly. In this course, IM Keaton Kiewra explained key ideas of this and how you can beat your opponent by using this idea.

This course is on chess.com. It means you don’t have to buy this course. You can get free 7 days chess.com trial from here. If you have already used chess.com free trial, you need to purchase chess.com Diamond Membership to watch this course.

This book is written by a very well-known author Grandmaster Ivan Sokolov and published by Thinkers publication. Grandmaster Ivan Sokolov is a very famous coach also. He has coached the Iranian team which included GM Firouzja Alireza, GM Parham Magsoodloo, etc. Grandmaster Mathew Sadler said this about this book in new chess magazine 2019 – “Probably not an easy read for the club player, but still an original and high-class exploration of one of the most important openings in chess. It’s a really good book! 5 stars”

Also, there are hundreds of free videos are available on Ruy Lopez which you can see and learn.