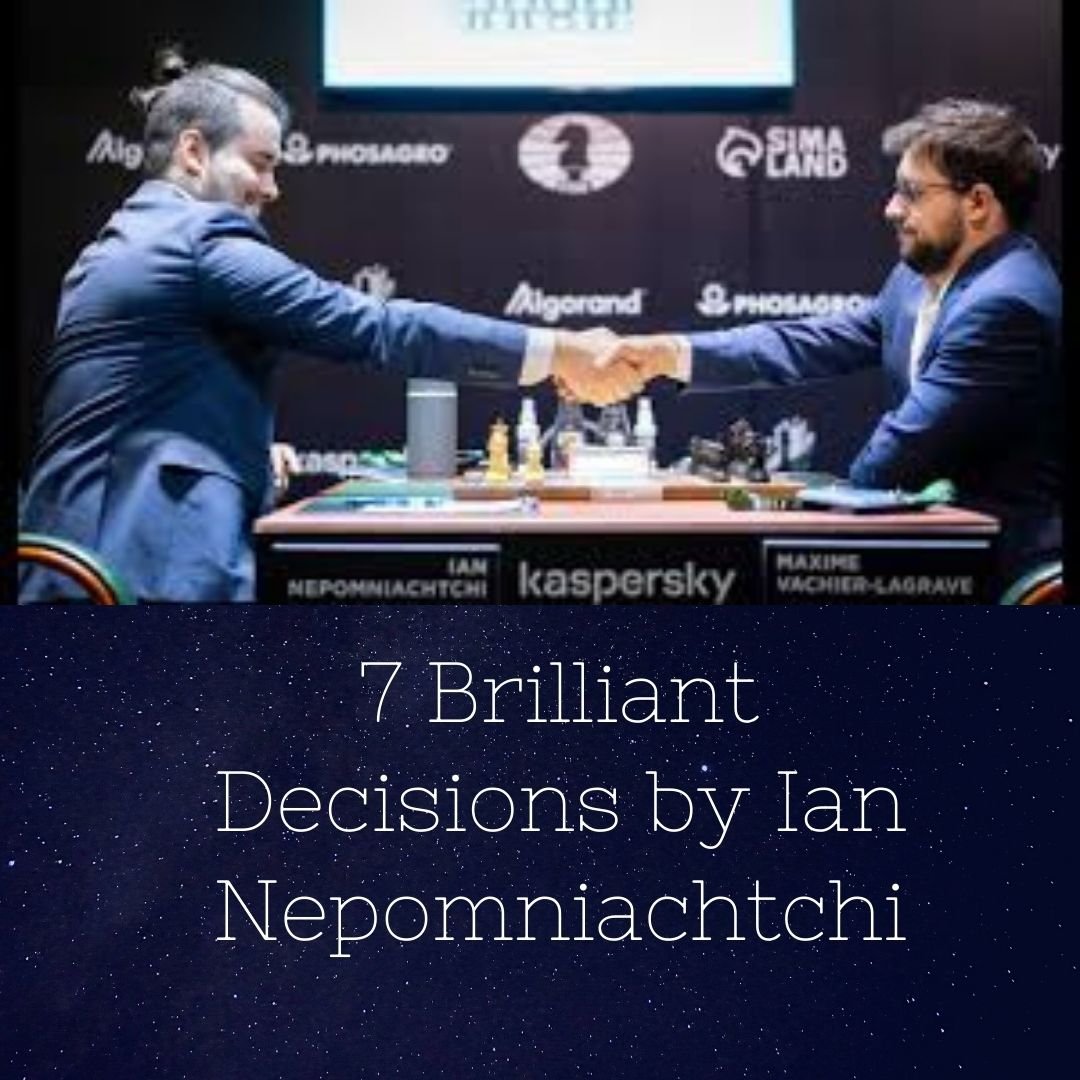 FIDE Candidates Chess Championship 2020/21 came to an end on 27th April 2021. Ian Nepomniachtchi won the event with 8.5/14. He won it stunningly with a round to spare! The event was already a topsy one with the pandemic making a guest appearance and forcing it to be conducted in two halves.

What were the special things that made Ian the champion? What things did he do correctly to challenge Magnus Carlsen for the world title? Let’s find out those 7 Brilliant decisions by Ian Nepomniachtchi and his team during their glorious run in the Candidates event 2020/21.

Bailing out with a draw in Round 8

Ian Nepomniachtchi faces Anish Giri in round 8. Anish used the Sicilian Shvesnikov to defend with black pieces. A moment came when Anish had smoothly equalized. It was a perfect decision by Nepo to take a draw. Taking a draw with white pieces in such a big event is not an easy decision to make, but it’s more important to be practical than to be emotional.

Staying true to his Grunfeld!

Ian is known for using Grunfeld as his pet opening against 1.d4. This is what he opted against Alexander Grischuk. Ian is used to facing novelties in the Grunfeld and also fights tooth to nail with his deep understanding of the position. No matter how hard you prepare, this guy is used to solving problems over the board.

Strong theoreticians like Vidit Gujrathi, Anish Giri, and Surya Shekhar Ganguly have tried to break the fortress but have not been able to finish him off. The person who managed to do this was none other than 5 times former world champion Vishwanathan Anand. He beat Ian in only 17 moves in Online Nations Cup 2020.

Using white pieces to make the most of it!

Alekseenko Kirill was the lowest ELO-rated player in the event. Everybody knows his strength as he was faring well in the event. He had beaten Grischuk on the resumption day. Ian Nepomniachtchi smartly transposed the English opening into a better version of Catalan which the former world rapid champion Daniil Dubov on FIDE commentary called a winning position in 10 moves! Kirill couldn’t solve the problems posed by Ian and soon lost the game. This win gave Ian a 1-point lead over the nearest rival Anish Giri

In round 11 Ian smartly used 4 Knights opening against Fabiano Caruana to make an easy draw. The reason I call it smartly was his decision to play simple chess when it was a scenario where his opponent was running out of games to catch him. It is never easy to play for a win with black and that’s exactly what Ian used to trouble Caruana.

Going for a kill on demand!

Ian had half point lead over Anish as he managed to beat Ding Liren and reduce the gap between both them. But in round 12 it was Fabiano vs Anish. Beating Fabi with black was not an easy task, but as fabi was in a must-win situation he was ready to burn all bridges. Anish took an advantage of this scenario and played a flawless game.

So now Ian Nepomniachtchi playing black was having an equalise middlegame against Wang Hao where the structure was symmetrical and Queens were exchanged long back. To squeeze a point from here on was a tough task and having noticed Anish winning against Fabi, Ian kept on posing problems and Wang crumbled under pressure. This helped Ian win the game and maintain a half-point lead going into the penultimate round.

Ian Nepomniachtchi faced Maxime Vachier Lagrave in round 13. MVL was in a must-win scenario to get near to Ian. Using this fact and white pieces, Ian opted for 1.Nf3. In a press conference, he explained his choice by mentioning that he was not interested in a theoretical debate in either Grunfeld or Najdorf. Ian took advantage of MVL’s dubious opening choice and had a great position. When he saw that Grischuk was winning against Anish, considering that it would be ideal for him to win the candidates, he took a draw and won the candidates with a round to spare.

Staying true to his style in the final round

Ding Liren was playing for their reputation in the final round. He made the most of it by beating the tournament winner in style! He opted for a Benoni setup against 3.f3 and the game was quite complicated but finished off soon. Ian won the event but he also managed to entertain the spectators with a fantastic complex game.

Ian Nepomniachtchi will be playing a world chess championship match with GM Ding Liren of China.