NIhal Sarin, a chess prodigy from India. He is an Indian chess grandmaster born on 13th July 2004 and he was born in Thrissur, Kerala. Nihal is said to be the next big player from India. His love for chess can be seen and his name in bullet chess is known all over the world. He is only 17 years old and his chess skills are so good and the way he plays faster moves stuns the audience every time. There are some of his achievements and facts you may not be aware of. In this article, we will tell you the fascinating facts about Nihal Sarin. 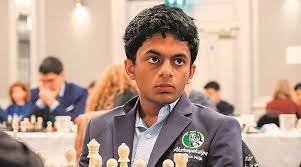 Nihal started playing chess when he was only six years old. It is said that when Nihal was three years old he could recognize the flags of 190 countries. He started learning chess at the age of six and he spoke fluent English when he was 6 years old. Nihal’s father is a dermatologist and he brought a chess set for him. His first coach was Mather P. Joseph Pottoore. His mother usually travels with him around the world for tournaments.

Nihal won the Kerala state championship in the U-7 category. This was his first tournament win.

Nihal got the GM title in 2018 at the age of 14. Becoming a GM at such a young age is a sign of achieving more success in chess. His moves are so good according to his age. Nihal became the 53rd grandmaster for India and we wish him more success. He is also the 12th youngest GM in the world. You can talk about chess with him any time of the day. After looking at the players like Nihal Sarin, we can surely say that the future of Indian chess is going to be very good.

The Indian Chess prodigy, Nihal crossed the Elo rating of 2600 at the age of 14 years and 10 months. He becomes the youngest Indian to cross this much Elo rating. He also became the third youngest in the world to achieve this rating at this age. He crossed this rating faster than the World champion Magnus Carlsen. The peak rating he has reached is 2655 and we hope that he is going to cross 2700 next year.

He plays attacking and positional games. He is not like a positional player every time, if he is seeing an attacking move, he will go for it for sure. He can play very fast and hard moves within seconds. He usually makes fast decisions in his games.

In 2018, Nihal was only 14 years old and he played the players who are the super grandmasters in chess right now. He scored 3/9 with draws against the legendary Vishy Anand and some other top chess players. Later, after the tournament, Anand said ‘It’s a long journey forward for Nihal’. It’s not easy for a 14-year-old to compete between the world-class players of chess. Later, he competed in the World Blitz championship 2018 and scored 13.5/21, his rating performance rating was 2777.

Nihal was part of the Indian team in the Online Chess olympiad 2020 and 2021. India won the gold medal along with Russia as a joint winner in 2020. In 2021, India won the bronze medal. Nihal was completely dominating in junior chess boards.

Nihal Sarin won the Junior Speed Chess Championship 2020 conducted by Chess.com. He is a fan of speed chess. Later, he won the Capechecs Online Trophy. He also won the World Youth Championship In the Under-18 category the same year. In a match against IM Francesco Soins, Nihal won the Gazprom Brilliancy Price for this game.

Nihal participated in the Julius Baer Challengers Chess tournament and was selected to receive training from Vladimir Kramnik and Judit Polgar. The selected 19 candidates had to face Magnus Carlsen for a head-to-head 3-minute game. Nihal was among two grandmasters who were able to defeat the World Champion. This was his first victory against Magnus Carlsen in an official game.

In June 2021, Nihal went to Serbia for playing over the board tournament after more than a year. He scored 8/9 and won the tournament. His performance rating was 2807. The next month, he won the Serbia open Masters with a score of 7.5/9.

Nihal has a youtube channel and he sometimes plays chess on it. He is not a regular chess streamer though. Nihal is well known for his love and accuracy in bullet chess. He sometimes even plays with 10-second time control with no increment.

These are some of the facts about the chess prodigy Nihal Sarin. He has won so many tournaments at such a young age. He is going to be a World Champion in the future (we hope for this). Feel free to comment down below, if you know any unique facts about him. Share this article with your friends and family. Thanks for reading.